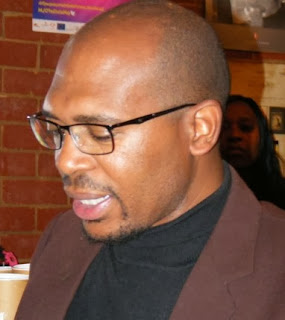 Khulile Nxumalo was born in Diepkloof, Soweto, in 1971. He finished school at Waterford Kamhlaba, Swaziland, and went to University of Cape Town, University of Natal and Wits University. His first poetry collection, ten flapping elbows, mama, was published by Deep South in 2004. His second
collection, fhedzi, was published by Dye Hard Press in 2013. His work has appeared in several literary journals in South Africa, Canada, the UK and the US. Nxumalo has twice won the DALRO award for poetry.  He also participated in the LitNet My Generation project, with his contribution ‘The train goes on coal’.

An extensive interview with Khulile Nxumalo by Alan Finlay was published in New Coin, and is available here.

DH: When did you start writing poetry?

KN: I started writing, playing around with the poetry we were studying in high school. But it was only when I got to university in Cape Town that I really starting engaging and applying myself to the craft. At school it was people like John Donne, Milton, the sonnets of Shakespeare and Wordsworth. I think it was being exposed to poetry other than classical English that ignited interest in trying to write. At university as part of English we studied Eliot, Blake, Frost, ee cummings, Sylvia Plath etc. I also took courses by Prof Kelwyn Sole on Oral Literature and in African Literature, but by then I had been exposed to Okigbo, Soyinka, Jack Mapanje, Sipho Sephamla, Serote, Kgositsile and Mattera.

What poets have been your main influences? What South African poets do you particularly like? 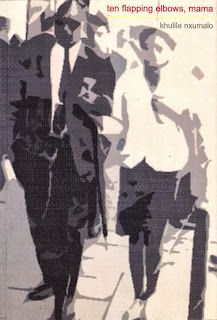 Mongane Serote has been the most impactful influence. I try to read South African poetry widely, mostly in the journals that still exist. The poets I like are too numerous to mention. Also, one tends to be touched or affected by a poem, and it can even be from a lesser-known poet or writer. Seitlhamo Motsapi introduced me to the work of Kamau Brathwaite, and that has been another long-standing line of influence.

In the blurb to your first collection, ten flapping elbows, mama, you wrote:  “I what I call psycho-narration, I try to write beyond the understanding that ‘inside of one’s head’ and ‘the objective world’ are distinct worlds. This is a form I have grown to love more since I started preferring the long poem format that sits on a conversational tone. It’s a multi-vocal way of writing or telling stories in a less authoritative way, a kinda voice democracy in the poem.” For me, the long psycho-narration poems have a montage effect and I am reminded of TS Eliot’s The Waste Land. Can you tell us more about how you came to psycho-narration? 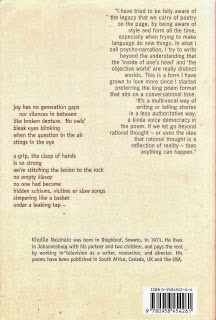 The poetry I was trying to write at high school reflected and imitated stuff like rhyming schemes of Petrachan sonnets, and the tight barriers of language in the form. When I started to work in the long form, the writing achieved a conversational tone. In another phrase, the poetry loosened. Psycho-narration is about writing as of you are narrating your own psychology. It becomes interesting when you try to imagine a fluid barrier between the objective and the subjective, in that the stability of the “I” persona becomes affected, and voice takes on more interesting dimensions. Our generation of writers has to contend with a less certain country and world, that is if you are thinking of the post-apartheid era, and that is part of the context that makes for searching for new ways to say things.

I find the voice of your new collection, fhedzi, to be more singular, more unified. There is a sense of one, personal voice. 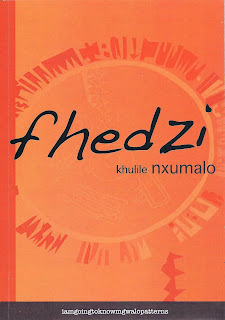 I think fhedzi is influenced by jazz and other musical rhythms more than ten flapping elbows, mama and that tends to unify how poems are elaborated, and creates unity of emotion. Even though I had set out to write an angry book about the ghost of my absent Venda father, I ended up with material that has a stronger sense of self in it, and I imagine this is what you mean by “personal voice”. I think the strong application that Alan Finlay brought to the editing also makes the book more unified, as we cut out quite a lot of stuff, and we were open to new versions of poems that might have appeared differently at another time.

Going back briefly to the blurb for ten flapping elbows, mama, you wrote: “If we can go beyond rational thought – or even the idea that rational thought is a reflection of reality – then anything can happen.”  Do you still have such a view of the potential of poetry, or has it modified in the past nine years?

Yes I still do. It is not just for poetry but for the act of imagination itself. Some of my concerns at the time of making that statement were from realising that there is richness in that I, for a number of years, had imagined, conceived, created and uttered realities in languages other than English. At the time, discourse analysis and deconstruction were in vogue in literary studies, and I guess some of that filtered into how I theorised about my writing.

Ten flapping elbows, mama contains a “proemdrama” called “Craftin’”, and fhedzi contains the choreo-poem “The Melville Plenoptic”.  These are not plays in the accepted sense, and not quite dramatic poems either. What is your experience with the theatre? 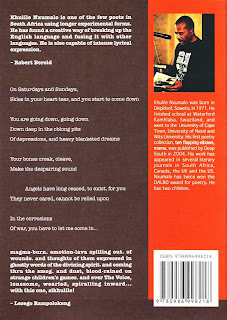 Well, you will not believe, but I acted in plays like Noddy, Pinocchio, Aladdin as part of Johannesburg Children’s Theatre. That was at the time when experiments of integration between black children in the townships and white kids in the suburbs were increasingly taking place. Almost around the time of the scrapping of the Group Areas Act. I developed a deep interest in the theatre from then, and went to see a lot of plays at the Market Theatre. Currently I am studying for a master’s in dramatic arts, where as part of my practical examination I will stage a piece that is a mixture of both “Craftin’” and “The Melville Plenoptic”.

You have also done some work in film I remember seeing a short documentary about Staffrider  that you made with artist Tracey Rose. Have you ever been involved in music?

I listen to music ‒ all kinds really. I do wish I had learnt to play the cello. I mess around on the guitar, for the simple three-chord type of tunes. Before working at the SABC, I was directing documentaries. Among others, I directed a documentary following the daughter of Credo Mutwa in a search to find out why their house was burnt in 1976, and collaborated with Tracey Rose as part of the Chimurenga Digital library where I reminisce about the time when the Market Precinct was buzzing with activity, and poetry and writing were driven by COSAW initiatives, while bemoaning that I never got a chance to be published in Staffrider.

What is your opinion of contemporary South African poetry? Are you optimistic about the future of poetry in South Africa?

I think the journals must continue to exist for South African poetry to maintain a sense of being alive. That is how I have also kept going in between collections. I think we need a radio programme that focuses on poetry,that could also have a digital existence. I am optimistic as most of the poets, even those from the generations older than us, still continue to publish. I remember the last issue of Kotaz where Mxolisi Nyezwa focused on a number of poems in isiXhosa. As a country with so many languages, these must be reflected in the written and published poetry.

Posted by Gary Cummiskey at 11:39 PM No comments: