Bruno Sourdin: Anything can happen

Bruno Sourdin is a French poet and collagist. He was born in 1950 in the Mont-Saint-Michel area. After studying journalism in Paris, he travelled in Morocco, Egypt, and India. He now lives in Normandy. His first collection of poems, Les Haillons d’Ecume, was published in 1977. His more recent titles include Hazel (2005), L’air de la route (2013), Vers les fjords de l’ouest (2015) and Chiures de mouches au plafond (2016). His blog, titled Syncopes, contains interviews, commentaries, poetry, and art. His poems have also been published in the South African poetry journal New Coin.

DH: You were born in 1950, so I am curious about what it was like being a young man in the late 1960s and early 1970s. It was the end of the idealism of the 1960s and the beginning of something new in the 1970s, though maybe people did not yet know what the 1970s would be like.
BS: We cannot refer to this period without mentioning the impact of the May Revolution of 1968 in France and how liberating it was for a whole generation I grew up with. I was barely 18 years old. It was both a rejection of the consumer society, a protest against knowledge, a revolutionary moment of illusion and a much-needed change of life. 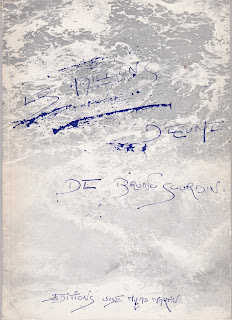 I can remember in those days the academic poets spoke like mandarins. We were on the brink of asphyxia. It was a pitiful old film, pathetic and especially very annoying. Poetry had lost its luminous glow. We lived those May 1968 events as emancipation — many slogans which seemed to come straight from a surrealist poetry book could be seen anywhere: “Under cobblestones is the beach”, “It is forbidden to forbid”, “Run away my friend, this old world is behind you”…
You made your first collage in 1970 and your first book of poems, Les Haillons d’Ecume, was published in 1977. How did you start making collages and writing poetry? Why collage?
I wrote my first poem in 1970, with wind in my hair, in an unpredictable state of joy, between Burgos and Granada. Tangier and Marrakech were still far away. My first writing experience is utterly connected to the road. Intimately.
That same year, I made my first collage; a way to offer another reality. It just happened at the same time, as a necessity. I go from one to the other, randomly, according to my heart. Cut-and-paste words or images, no matter. Anything can happen.

The US Beat poets seem to have had a big influence on your thinking and poetry. When did you start reading the Beats and why?
When I was 18, I was really moved when reading the poets of the Beat Generation. Allen Ginsberg, Jack Kerouac, Gregory Corso, Gary Snyder, Michael McClure … And I believe my sensitivity has been deeply affected. A big book that brought together texts written by William Burroughs, Bob Kaufman. Claude Pélieu, their translator and the only French poet who was part of this extraordinary tribe, especially amazed me.
Claude Pélieu, who was exiled to the United States, blew up the classical language. His poetry was delightfully burning and chaotic. With him, the old disincarnate academic writing was over. With him, you could finally breathe. Like the generation of surrealists had formerly done.

What artists have influenced you?
Max Ernst, who used to experiment with techniques that helped him to “force inspiration”. His collages, collected in albums, are true masterpieces. Generally, I like the collages of surrealist artists: Max Bucaille, Jindrich Styrsky, Jacques Prévert … But I also particularly admire Erro’s work – a leading figure of the Narrative Movement and a creator of collages (which often serve as blueprints for his paintings).

Did you do a lot of travelling during the late 1960s and early 1970s? Two of the poems in your first collection, which are dated 1970, were written in Amsterdam and Marrakech. 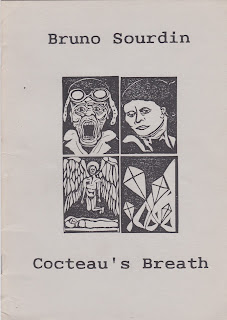 It was the call of the road. Many American hippies had taken refuge in Europe to flee the Vietnam War. I met many of those beautiful people from Marrakech to Amsterdam … It was a time of freedom and optimism. People believed in the goodness of human beings, exchanged ideas, dreams and utopias. But all this has now completely disappeared and is not going to happen again soon.
You have also participated in the Mail Art scene – how did you get involved in that?
I got particularly interested in Mail Art around the 90s. Roger Avau (aka Metallic Avau), a famous mail artist from Bruxelles (Belgium), initiated me into his trade. I took part in many worldwide exhibitions and also got the opportunity to set up two: “The street is a dream” in 1993 and “Janis Joplin”, six years later.
I believe Mail Art is the best way to keep your creative mind alert. Besides, I collaborate in several assembling zines – which are compilations of various artists’ work, with a specific theme or not. I built an international network of friendship and exchange over time, which still exists today via Facebook. It is obviously a different approach (tactile versus digital form) but not necessarily opposite: to me, the Mail Art network was a kind of pioneer of the new social networks. 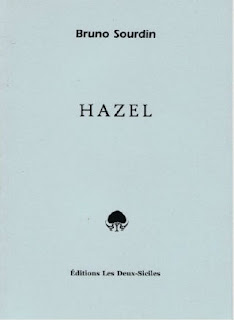 You published a book of poems about India called Hazel. When did you visit India? What did you think of it?

I see India as an inexhaustible source of inspiration. Hermann Hesse used to say that the Orient was “the fatherland and the youth of the soul.” That is also my opinion. I travelled to the Indies in the 1980s. I am fascinated by the philosophy and the work of Sri Aurobindo.
From this trip, I brought back a journey log that I called “Pondicherry, the witness and the wheel”. It is a kind of inner reporting. In India, the atmosphere is very different from the one in the Occident. It is an exceptional experience.
Later, I met the Calcutta-based poet Pradip Choudhuri, my “eternal brother”, who was part of the Hungry Generation. I love his crazy inspiration and the terrible wind he blows in his poetry.
What music do you like best and who are your favourite musicians and bands? 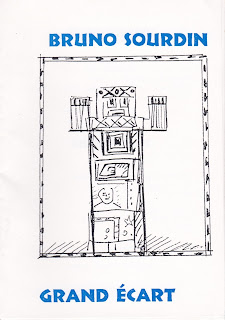 In the summer of 1965, the year of my 15th birthday, I made a trip to England and fell madly in love with the Beatles’ rock music. It was totally new and brilliant. With Bob Dylan, the magic became clearer. Albums such as Highway 61 Revisited and Blonde on Blonde made me vibrate with their poetic intensity. And still. The list of these wonderful rock poets is endless: Pete Townsend, Robert Wyatt, Jim Morrison, Lou Reed, Patti Smith …
On another side, I also have a passion for US minimalist music. Terry Riley, Steve Reich, La Monte Young and Philip Glass have opened new musical spaces where I like to walk.
You have been friends with some wonderful, fascinating poets and artists who have since passed on. I am thinking about poet and collagist Claude Pélieu, about whom you published a book, poet Alain Jégou and artist Pascal Ulrich. What are your memories of them
I started writing to Claude Pélieu in 1991. He lived in New York State and he made a newspaper-collage of the universe. I was enthralled. In 1993 he moved to Caen (Normandy) with his American wife Mary Beach, not far from my home, and we became friends. We used to meet each other frequently. It lasted a year and it was a wonderful memory for me, but the experience ended in a crushing failure for them. As a result, they went back to New York, and Claude and I started our intense correspondence again. 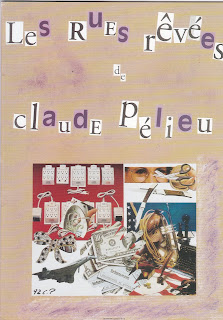 He died on December 24, 2002, in a hospital bed. He was very ill and they had to amputate one of his legs. Just like Rimbaud. It was awful.
I knew Alain Jégou very well and he also was a close friend of Claude Pélieu. He was a fisherman in Brittany. I loved his fury of living, his fraternal gaze and the voluptuousness of his writing. He wrote a tremendous book about the sea and his sailing experiences called Ikaria, the name of his boat. As for Pascal Ulrich, he would work in an emergency, under the impulse of the moment. He wrote thousands of letters illustrated with his own drawings for his friends. I think he was nostalgic for a lost paradise. Loneliness, illness, and despair finally took him away. It was terribly painful and it made us cry a lot.
You recently published a collection of haiku called Chiures de mouches au plafond. What attracted you to the haiku form? Do you find it challenging?

I first heard about haiku 40 years ago, whilst reading The Dharma Bums by Jack Kerouac. This form of poetry instantly captivated me since it was simple and true, concise and puzzling, without artifice nor sophistication. I appropriated this style and wrote my own haikus in French with no specific ties and tried my best to express myself on complete impulse. 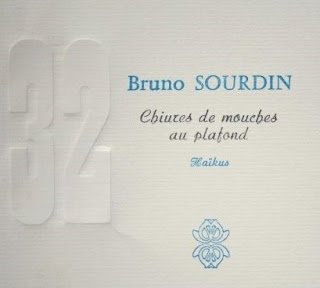 Is it difficult for poets to be published in France these days?
Yes and no. Nowadays, the space assigned to the poetry in the literary milieu has substantially decreased. But paradoxically, this type of writing has never been more inventive, creative. And that is precisely what many small publishers are looking for: authors able to think outside the box.
What projects are you busy with at the moment?
As always, I trust in life. I am receptive, I am attentive. I breathe in and out deeply. I move. Freely.
Interview translated into English by Fidélise A, Sourdin. First published in The Odd Magazine and then Empty Mirror. The original French interview appears on Bruno's blog, Syncopes.
Posted by Gary Cummiskey at 3:53 AM 3 comments: